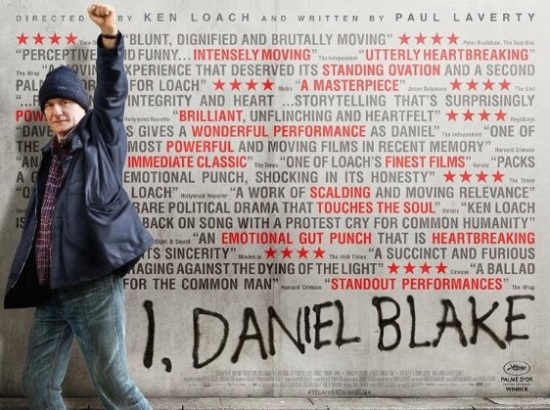 Today I went to see Ken Loach’s excellent new film I, Daniel Blake, which won the Palme d’Or at the Cannes Film Festival this year. The film follows Daniel (Dave Johns) and his struggle to gain benefits after a heart attack leaves him unable to work. He becomes friends with Katie (Hayley Squires), a single mom also struggling with the welfare system. The film touchingly depicts what happens when a society’s policies put money and commerce ahead of human life and dignity. I would highly recommend seeing this film.

Here is the trailer:

The film’s writer, Paul Laverty, along with the actress Hayley Squires introduced the screening and came back for a too-brief Q&A at the end. She said that one of the things she liked about working with Ken Loach on this film was that he shot the film in chronological order.

Paul Laverty said that he wrote the film in response to the banking crisis and the austerity policies that followed in Europe. He discussed how some politicians saw cutting welfare benefits and making them more difficult to get as low-hanging fruit. Those who were disabled were also particularly targeted for cuts. He commented on how there was a general perception that fraud in the welfare system was rampant, as high as 25%, when it was actually less than 1% of cases.

Following one of the questions in the Q&A, he also spoke about the recent presidential debate and how Trump commented that he was being smart to avoid paying  taxes. Paul Laverty said that it was a “dagger in the heart of civility” for someone so rich to gloat and think it smart to avoid paying his share for society. The audience clapped very loudly at this.

It has been over 150 years since Charles Dickens wrote the following famous lines in A Christmas Carol:

Sadly, we as a society have yet to learn that mankind is our business.

3 thoughts on “I, Daniel Blake and a “Dagger in the Heart of Civility””